“AUDITORIUM OF PATTI, CARUSO IS YANKS’ NOW,” declared the headline in the Chicago Tribune on September 27, 1942, the day after the Auditorium Theatre officially reopened as the fourth Chicago Service Men’s Center. The theatre, which had hosted opera greats like Adelina Patti and Enrico Caruso, plus countless other classical music and theatre performances, closed to the public in 1941 after theatre operators could no longer afford to pay taxes on the building.

Instead of allowing the building to sit vacant, the city of Chicago took over the theatre and turned it into the service men’s center, where military men could stop in for a bite to eat, listen to music, partake in recreational activities, and more.

The building “awoke [on September 26] to find itself rococco in red, white, and blue.” On this first day as a service men’s center, men “nibbled cookies and hot dogs at red and white tables” in the Auditorium’s elegant dining room, where guests had once feasted on caviar and champagne. The soldiers were greeted by Margaret Kirk, the wife of Chicago’s then mayor Edward J. Kelly, who declared that she hoped to see the Auditorium’s ballroom used for both dancing and roller skating. 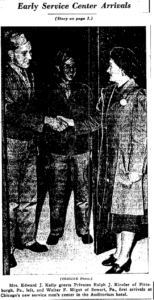 A few months later, the Auditorium Theatre’s legendary stage was converted into a bowling alley. Competitive bowlers from around the country headed to the Auditorium to face off in tournaments in front of an audience, and soldiers used the lanes for recreation when they passed through Chicago. “The famed Auditorium acoustics will be tested by the crashing of pins for the first time this afternoon, when competing artists in the All-Star tournament will open a sweepstakes event designed to break in the lanes,” the Chicago Tribune reported on December 4, 1942. The orchestra pit, along with 15 rows of seats, was removed to make way for the 12-lane bowling alley. 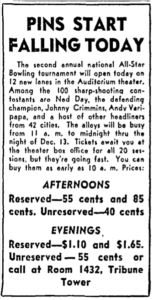 An ad in the Chicago Tribune for the All-Star Bowling tournament at the Auditorium.

In addition to bowling, dancing, and maybe even roller skating, the Auditorium was also outfitted with music rooms, billiard tables, and even a library. The Chicago Public Library donated 5,000 books for service men to choose from. The Chicago Tribune reported on the library’s popularity: “Walk in there any Sunday, and you’ll find it so crowded men are standing up to read. The fact that a piano and 25 singers are creating a terrific din 20 feet away makes no difference. As a boy from Scranton, PA., said, ‘It’s wonderful to go into a library where it isn’t all hush-hush and where the shelves are full of something besides Scott and Dickens in dull brown bindings.” Three “music appreciation rooms” were created, so that men who preferred the popular music of the day like Benny Goodman and Harry James could listen to their tunes of choice without conflicting with those who preferred Tchaikovsky.

When World War II came to a close in 1945, so, too, did this chapter in the Auditorium Theatre’s history. The theatre completely closed down and would remain shuttered until 1967, when it reopened as a performance venue following a multi-million dollar restoration.